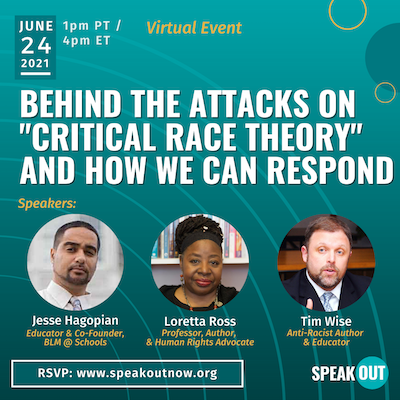 Attempts to censor discussions of race and racism are underway nationwide. GOP lawmakers in at least 21 states are either introducing legislation or have already passed bans that impact K-12 classrooms and in some cases, colleges and universities. At the federal level, 30 House Republicans signed on to bills that would prohibit diversity and anti-racism training in the military and federal agencies.

Critical race theory (CRT) is becoming the flashpoint in this debate over how U.S. history and racism can be addressed in classrooms, government agencies, trainings, and conferences. CRT examines the ways institutionalized racism and other systemic barriers to equality are embedded in U.S. society and how institutional and systemic inequities disproportionately affect people of color. But for opponents, it is a catch-all threat to white people, lumping together multiculturalism, anti-racism, identity politics, and racial justice education.

Who and what is behind this orchestrated assault? More importantly, how must we respond? These questions were addressed in this engaging virtual by these three important racial justice leaders and educators:
• Jesse Hagopian - One of the acclaimed educators in the Black Lives Matter at School movement, author and editor for Rethinking Schools magazine, Ethnic Studies teacher at Seattle’s Garfield High School and a leader in the national effort calling on educators to pledge to teach the truth in the face of these bans.
• Loretta Ross - A nationally-recognized expert on racism and racial justice, author of the forthcoming, Calling In the Calling Out Culture, and professor at Smith College (Northampton, MA) in the Program for the Study of Women and Gender, teaching courses on white supremacy, race and culture in America, human rights, and calling in call out culture.
• Tim Wise - One of the country’s leading anti-racist educators and trainers on methods for dismantling racial inequity in institutions, a political commentator, and author of nine books including his latest, Dispatches from the Race War, and the acclaimed memoir, White Like Me: Reflections on Race from a Privileged Son.

PLEASE NOTE: The link is not generated automatically.
A staff person will be emailing it to you shortly (during work hours of 9:00 am - 5:00 pm PT).