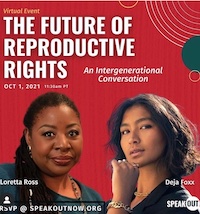 In this intergenerational conversation, two leading reproductive justice activists, Loretta Ross and Deja Foxx, dig into the implications of recent rulings that threaten the future of women’s rights in the United States. A number of states have pledged to follow Texas’ recent ban that essentially outlaws a woman’s right to an abortion. And on their October docket, the conservative-leaning Supreme Court will consider a Mississippi state law that bans abortions after 15 weeks of pregnancy.

What does our response need to be to the right-wing attacks on women’s reproductive rights? Watch this powerful exchange that offers ways forward at this deeply critical juncture for democracy.

Loretta Ross is an award-winning, nationally-recognized expert on racism and racial justice, reproductive justice, women’s rights, and human rights. She is co-author of three books on reproductive justice, and author of the forthcoming, Calling In the Calling Out Culture. Currently a professor at Smith College, she previously served as co-founder and the National Coordinator of the SisterSong Women of Color Reproductive Justice Collective, Founder and Executive Director of the National Center for Human Rights Education, and National Co-Director of the 2004 March for Women’s Lives in Washington D.C., to name a few.

Deja Foxx is a reproductive rights activist, political strategist, and blogger. A 21-year-old student at Columbia University, she already has an impressive organizing resume - from fighting for more relevant sex education while in high school, to working to protect Title X birth control funding for low-income women; from founding a number of Gen Z-focused non-profits (like GenZ Girl Gang) to serving as the youngest staffer on U.S. Vice President Kamala Harris’ presidential campaign. Deja has also been called the New Face of Planned Parenthood, partnering with the organization to run trainings, speak at events, and serve as a board member for Planned Parenthood Arizona.

What some of the attendees had to say about this webinar:
"This event was amazing, inspirational, and transformative for me. (They) were absolutely fabulous and spoke from their heart and their lived experience. What a great event...!"
"Five stars for this program."
"Truth to Power at a whole other level. Thank you!"
"This was a wonderful event! I love hearing the different perspectives that Loretta Ross and Deja Foxx had to offer and feel energized as a result."

PLEASE NOTE: The link is not generated automatically.
A staff person will be emailing it to you shortly (during work hours of 9:00 am - 5:00 pm PT).